Chickpeas are my favourite legumes.  I prefer to buy dry beans and legumes in bulk, as this saves a lot of packaging and chemicals.  I love potatoes, too, so this is a can’t miss combination for me.  I am also a fan of warm salads, and am  not particularly fond of lettuce-based salads, as I don’t find them filling.

I love to cook.  I am what you might call an improvisational cook, as I rarely use planned menus and recipes, unless I am cooking for a dinner party.  I cook based upon ingredients I have at hand, and I make everything up as I go along.  I have been posting my various creations on Facebook for a while, mostly to answer the “but what do you eat?” question.  I don’t believe in proselytizing a vegan diet; I post only for those of my friends who are genuinely interested in how to manage a healthy, nutritionally-balanced vegan diet.  My friends keep asking me to provide recipes; the problem is that I rarely ever measure ingredients, but simply add them as I go along.  I’ve been cooking long enough to have a feel for what will work, to eyeball quantities, and so forth.  There are several vegan food blogs out there with various degrees of sophistication.  My blog is multi-functional; it’s a reflection of my various interests with no one particular focus.  I am very disciplined in most aspects of my life; this blog is an avenue that allows me to be unstructured. In response to my friends’ requests, I will sometimes post dishes I’ve created.  No fancy photographs will be provided; in fact, the item in this blog is photographed in a very well-used glass baking dish with the ground-in stains that are the sign of frequent use.

I made this dish last night.  Most of the vegetables I cook with are seasonal, as I like to buy from the local farmers’ market as much as possible.  I used an 20×20 (that is 8×8 in inches) glass baking dish, so the amounts I used were sufficient to fit this dish.  Again, I don’t tend to measure my ingredients; perhaps I should start doing this if I plan on posting the recipes.

This dish combines the following ingredients:

I was very disappointed to hear that Robert Fawcett, the man who killed 100 sled dogs following the 2010 Vancouver Olympics, has received nothing more than a token slap on the wrist. It was revealed that many of the dogs died slowly and painfully.  Fawcett kept claiming that he found killing the animals traumatic, but apparently not enough to stop him from doing it in the first place, from killing the dogs humanely, or from quitting his job.  Even with animal cruelty laws in place, so many courts impose the most lenient of sentences.  Given the outcry and attention that this case provoked, I very much hoped that the court would impose the maximum sentence yet, once again, the animals have been let down.

The greatness of a nation and its moral progress can be judged by the way in which its animals are treated. ~ Mahatma Ghandi.  Major fail, Canada.

Vegetarian News has listed the most health-conscious airports in the US. For a vegan, air travel can be a nightmare, particularly for long flights and layovers. Most airlines provide food for purchase, but there is never anything that isn’t filled with dairy or meat; often there isn’t even a vegetarian option.  Airports can be equally problematic.  I was most impressed with JFK airport, where one of the concessions (I can’t remember the terminal) had specifically-targeted vegan offerings.  The link might go down, so here is the list verbatim:

As a frequent traveller through Newark Liberty Airport, I must agree with this assessment UNLESS you fly through Terminal A, which is usually the case on my flights back to Halifax, in which case Starbucks is normally the only option.  I have to be very desperate for a caffeine hit to go to Starbucks, but that’s another story.

The Huffington Post reported today that the third season of Sherlock might not air in Canada until 2014. This date pertains to PBS, so perhaps BBC Canada will air the show a little earlier.  Still, this is disappointing news, as I had been hoping for early 2013.  It’s clear that the filming schedules of Martin Freeman (The Hobbits) and Benedict Cumberbatch (Star Trek 2) are the root of the delay.  Given the talent of both actors, I’m pleased that they are both in demand, and I am eagerly anticipating Star Trek 2 (have I mentioned that I’m a Trekker?).  I’m sure that’s a collective scream I’m hearing from the legions of Sherlock fans.

Interesting article that discusses the 30 toughest film actors; what I like about it is that it deals with what made the actors tough in real life, not on screen.  I live in hope for the day that a similar article will be written about actresses.

I’m a dyed-in-the-wool Trekker, so the news about the new Star Trek prologue that will accompany Hobbit makes me very happy: ‘Star Trek Into Darkness’ Prologue Hits IMAX 3D Theaters with ‘Hobbit’ | FirstShowing.net.  I am crossing every digit that there will be a non-3D format of the film, as I’m not a fan of this medium, as I’ve discussed in a previous post.

As I watched the 1934 The Scarlet Pimpernel on TCM yesterday (for the umpteenth time), I reflected on how closely this story has been associated with me over the years.  I read the Baroness Orczy novel when I was seven or eight years of old, and loved every word.  I was a fan of Alexandre Dumas at that age, too, so anything related to the French Revolution was bound to attract.  I can’t remember when I first saw the 1934 film, but it’s continued to be a favourite of mine over the years.  I have seen several film or television versions of this story, but the 1934 Leslie Howard/Merle Oberon version is still the best.  Howard captured perfectly the foppish Blakeney-by-day persona, and Raymond Massey was the perfectly unctuous Chauvelin.  I have never particularly liked Oberon in the film, as I have always found her acting abilities to be limited, but she is certainly breathtakingly beautiful.  Below are some other versions I’ve seen over the years:

This 1982 television series starred Anthony Andrews and Jane Seymour.  Andrews carries this series with a wonderfully-nuanced performance.  Andrews excels at playing the affected upper-class dandy.  Ian McKellan turns in a good performance as Chauvelin. Jane Seymour is the weak part of this interpretation, but then I’ve always felt that the character of Lady Blakeney was not particularly well developed in the novel.

This 1950 David Niven version was disappointing.  This film is rarely shown on television, which perhaps speaks to its mediocrity.  Although David Niven was always charming on film,  I often found his performances to be lightweight, which is particularly true in this film.  None of the characters are developed particularly well, and you don’t connect with, or care for them.

This 1999 mini-series was produced at a time when the A&E station actually produced arts and entertainment, rather than its now endless series of awful reality shows. The cast is particularly strong in this version. Martin Shaw is a standout as Chauvelin and, for once, the character of Lady Blakeney, as portrayed by Elizabeth McGovern, is well developed, strong, and brave. I’ve always had a difficult time dealing with Richard E. Grant; mostly it comes down to his voice, which I find very irritating but, in this case, works well for the foppish side of Blakeney.

TCM is paying tribute to Burt Lancaster, whose birthday falls in November.  Lancaster has been one of my favourite actors since I was a child.  Lancaster has incredible screen presence:  You simply can’t take your eyes off him, even if he is sitting quietly in the background.  Few actors have had such a commanding presence on screen; obviously, his physicality played a part in this, as he moved with incredible grace, and had a powerful physique. More importantly, however, was the confidence and self-assuredness that Lancaster exuded; apparently this was true also of the man himself. Another aspect I admire about Lancaster was his willingness to play different characters, not all of which were heroic or admirable.  Lancaster’s famous smile could be charming or menacing:  You need think only of his character J. J. Hunsecker in The Sweet Smell of Success to see how that smile could be used as a weapon.  Below are my favourite Burt Lancaster films:

Judgement at Nuremberg: Although Lancaster had very little dialogue in this film, his one speech to the Tribunal is memorable; even in his silence, he spoke volumes. The film itself is a masterpiece of acting, directing, and pacing.

The Sweet Smell of Success: Lancaster played a truly unpalatable, cold, and ruthless character, which I doubt too many leading men of his time would have been willing to do.  The level of cynicism of this film is palpable, and it’s by far Tony Curtis’ best performance.

The Killers:  It’s a good film in its own right, but made more special by the fact that this is Lancaster’s film debut. The opening sequence is memorable in the way it foretells the fate of Lancaster’s character.  Lancaster and Ava Gardner are an impossibly beautiful pair.

The Crimson Pirate: If you had to equate fluff with Lancaster, this film would be it.  It’s a joy to see Lancaster with that gleeful smile, having the time of his life performing the on-screen acrobatics for which he had trained as a youth.

Run Silent, Run Deep: A tense and taut thriller that pairs Lancaster with the iconic and legendary Clark Gable.

Seven Days in May: Lancaster’s character is frightening in its fanaticism and conviction.  The scenes between Lancaster and Kirk Douglas, and Lancaster and Frederic March are particularly memorable

Elmer Gantry:  Burt Lancaster at his best.  No other film matches this combination of  Lancaster charm, physicality, energy, determination, and pure magnetism.

It’s proving to be very difficult keeping this list small, as so many of Lancaster’s films were of excellent quality (e.g., The Train, The Leopard, etc.).  Needless to say, Lancaster was one of a kind and we’ll never see his like again.

Kevin B. Lee has an interesting post on classic zombie films.  I must admit to being a fan of the zombie genre; my first exposure to it was Bela Lugosi’s White Zombie.  Like Kevin, I don’t think that any zombie film has ever had the impact of the 1968 Night of the Living Dead; I first watched this film alone at home and found it very creepy not to mention captivated by the ending. Below is a list of my favourite zombie films, in no particular order.  I am including The Cabinet of Dr. Caligari, since the somnambulist is very zombie-like.  Wikipedia has a comprehensive list of zombie films. 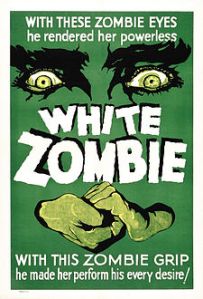 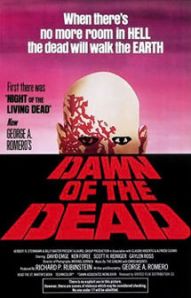